Everyone’s path to meaningful living is different, and today’s interview showcases Kelsey Connolly, who has shared her journey navigating the world of professional dance.

Kelsey lives and works in New York City. You can find her at The McKittrick Hotel–an immersive performance venue in New York City–home of Sleep No More, Manderley Bar, Gallow Green and the newly unlocked Attic. Her most current show is The Lost Supper.

When did you start dancing?

When I was five. I always did a lot of activities as a kid, like soccer, gymnastics, but dance took precedence. When I was around 10, that’s when I decided to be more serious about it, if 10-year-olds are serious about anything.

I did competitive dancing growing up, so I would go to competitions in all different styles. High school is when I decided I needed more technique, so I focused on ballet and went to a ballet school. I was there for two years while attending public high school. I was an apprentice in a ballet company and worked with professional dancers.

When did you know you wanted to pursue dance as a career?

I feel like I’ve always known. Going into high school is when I realized that I wanted to go to Juilliard specifically, a conservatory in New York City. I first auditioned when I was 16. I made it pretty far in the audition process, but then they determined I was too young to be in a college program. In hindsight, they were right. It’s not just a technique thing; it’s also a maturity thing, to be in a college program—it’s all-encompassing; you’re in Manhattan.

When I was auditioning the next year, I didn’t get in again. I was completely beside myself, like, this was my dream, but now I couldn’t do it because it was the second time I had auditioned and you were only allowed two tries. It was life-crushing. But then that day, as I was driving back from the city, I got an email that I had gotten into Michigan. One door closes but another one opens.

When I was at Michigan, I realized I wanted to go to Juilliard still, so I emailed admissions, and then they didn’t count the first audition since I was so young. I choreographed my own solo. That was my sole focus—and I got in. 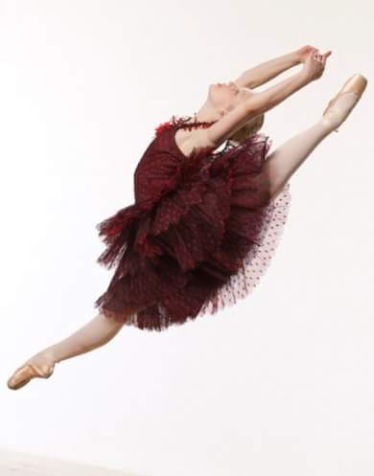 What did you do once you graduated college?

I was kind of burnt out, to be honest. It was such an intense program that I took the summer to figure out what I wanted to do, but prior to that, we had had auditions throughout the year as seniors. There was this one company that I was trying to get into. Literally, the day we were supposed to have the audition at school—the director was supposed to come and watch class and give an audition—the company folded. That’s what happens with a sole donor. A lot of companies, unfortunately, aren’t subsidized.

Through work-study, I had worked in various offices around the school. I had that skill set and somehow found myself working at a hedge fund in the fall after I graduated. Seems like the antithesis of the creative world that I’ve known my whole life, but I did that for a couple of months. It was an eight-person company; it was called a boutique hedge fund. When that company was bought out by another, they had no need for my position, so I thought, “Okay, maybe I should try dance again.” I was hostessing at a restaurant in the evenings, taking class during the day.

My very last audition of the season was at Radio City. They always say, “Oh, we’ll let you know in a couple of months.” I didn’t hear from them. I really wanted to move back to the city, so I got a job at another hedge fund as an office-manager-in-training/admin in reception. I was working there for three months, maybe, when I got a call that I got a slot at Radio City.

What have you been doing since Radio City?

After Radio City, I was teaching ballet at Ballet Academy East. I live on the upper east side in New York City, so it was a short commute for me. But with little kids, it’s less about dance and more about corralling the troops, at times. I was also babysitting a lot. Dog walking. I feel like I’ve had ten different jobs over the course of two-and-a-half years.

I go through these periods of time where I’m okay doing that, but then I get anxiety and feel like I need to be making more money, doing more things. So, the summer after Radio City, I was temping—doing less dance and more administrative things. I was working at a health insurance company and intermittently auditioning throughout that time, taking class and voice lessons. Like I said before we sat down, the hustle is real, the struggle is real.

So, alternating your focus—dancing for a little while and then stepping back—seems to be working for you.

Which is something I never ever imagined, because it’s been 24/7 dance my entire life. There were a lot of unknowns after graduating Juilliard. To come from such an intense program where you’re literally in school from 9am to 9pm, where you’re dancing all the time, to not having that as a guarantee is a little bit scary. The school tries to prepare you, through seminars and talking to alums and teachers. You have mentors, but everyone’s experiences are different. You have to create your own path.

How has that experience been?

I’ve learned to be less rigid with my timeline. There were definitely moments in my life where I was like, this is where I see myself going with a career or a relationship; I saw such a clear path. But there are detours. It doesn’t always work out. You have to accept that, but not dwell on that or ruminate. You need to be quick and change gears, change direction.

Like this past November to December, I was working in a temp-to-perm situation, but the company then determined that they didn’t need my position—okay, reset. I went into my babysitting and dog walking and working bat mitzvahs as a party starter. Every day is different.

What do you think your biggest challenge has been?

I think maybe coming to the place where I can accept wherever my life takes me. If you live your life truthfully, then things will work out. You never know which direction your life is going to take you, but stay true to yourself. It’s taken me a while to realize that, trying to sometimes fit a square peg into a round hole, forcing things that are just not going to work.

In general, the dance world is such an arbitrary career, because you go on these auditions and you have no idea what they’re looking for, and you get zero feedback. You don’t really know what to improve on. I feel like I’ve been up against it sometimes where, okay, it’s just not working. That’s why I keep going in and out of dance, to reset and figure out if it’s worth it.

That said, the number of auditions I’ve gotten cut from, but then they call me back four months later—it’s all about timing. You can’t let rejections feed your insecurities. Which is very, very difficult. I can only attest to dance, but it’s all you. It’s your body, it’s your looks, it’s everything. Rejection makes you question everything about yourself. As an artist in general, your art is you, so it sometimes feels like a personal attack if things aren’t accepted. But you have to take it with a grain of salt. Like, okay, well, on to the next—it wasn’t meant to be. I find myself saying that a lot.

Throughout my career in dance, I’ve hit walls. When I was 12, I was at this competitive dance studio and, as a kid who’s doing what they love and trying to get better, there were some interpersonal dynamics that just didn’t gel. I realized that it wasn’t the place I needed to be at to better my technique.

That’s an impressive conclusion to come to at 12.

I had my parents too, to talk about things with. There are a lot of dynamics with teachers, and it’s complicated. Eventually I went to Greenwich Ballet Academy, and I was there for a good year and a half before I went to college. That was a solid program, and I speak very highly of that school.

If you could give advice to a young dancer, or someone thinking about dancing as a career, what would you say to them or to yourself when you were younger?

Oh, the things I’d say. I don’t think I would do anything differently, because I think every experience is informative and it makes you who you are.

I would definitely reiterate, over and over again, that it’s not for the faint of heart. You can pursue this for your whole life, and there are still no guarantees at the end of the day, which sounds so miserable, like, what’s the point, then? You have to find joy in the work and do it for yourself, because you truly love it, and not because you’re trying to attain or achieve something.

Risk-taking, too, is a really good notion to drive home, because if you’re not going to take risks, what’s the point? Don’t be afraid of challenges. You’re not going to all of a sudden one day be comfortable in risk-taking. If you’re anxious, if you have butterflies in your stomach, it means that you should do it.

Listen to your gut. That’s another good thing for young dancers or young people in general.

So take risks, listen to your gut, keep trying, and don’t take it personally.

I’m constantly reminding myself of all of those things.

Me too, Kelsey, me too. Kelsey can be reached via her website or Instagram. Check out her Vimeo!

Previously in the interview series: Corey Hudson, founder of Hearts of Strangers.

Pick a Topic, Any Topic